I have been adventuring long enough to accumulate every last Veteran Reward the Pantheon of Masters has to offer, and as I considered Bigilam himself, it was very possible I could take him in a fair fight. However, pride is a sin, and these are desperate times. I wished him well and made my way to Commander Gearswitch who confirmed the stories about Meldrath’s fortress. “We appreciate your help with the ground forces lately, but it appears things have only gotten worse. We’ve been attacking his fortress as best we can, but his steamworks keep destroying our catapults. It’s bad enough that we’re running out of materials to keep them operational.” END_OF_DOCUMENT_TOKEN_TO_BE_REPLACED

Even injured and completely helpless against me, he would not divulge any information on the Minotaurs, their plans, Meldrath, or the steamworks. I did not take pleasure in what I had to do. If word got out, though, that Minotaurs who didn’t give up valuable intelligence may still be spared, our efforts at unraveling this mystery would be seriously handicapped. END_OF_DOCUMENT_TOKEN_TO_BE_REPLACED

After the attack was finally repelled, I devised a plan to keep them off balance for awhile. To counter the increased organization the Minotaurs are showing, I would go “mix things up” a bit at the source of the disturbance: the Minotaur mines. END_OF_DOCUMENT_TOKEN_TO_BE_REPLACED

Re: Third Report on Steamfront happenings.

I have some very grave news to relay to you. I will make it brief. I was awakened this morning by a violent rumble accompanied by the sounds of explosions that could be heard in the mountains to the northeast of Steamfont. The severity of the tremor hastened me to break camp and investigate.

On my way toward the Minotaur mining caves, I discovered some unsettling news. The steamworks had increased their range, and were now free of the confines of the mining valley.

I continued on to the valley only to find it peppered with Minotaur soldiers! These soldiers seemed to be organizing to launch some kind of assault. As soon as they detected my presence, they attacked. My trusty animated swords lunged to my defence and between the two of us, we were able to inflict enough losses that the Minotaurs needed to regroup.

I immediately took the opportunity to retreat to Ak’Anon, post haste, where my report was heard by King Ak’Anon himself. The king, though completely mechanized for many centuries now, seemed pensive. “I have been expecting this, Okosar. Will you take command of our defenses in Steamfont? I will put in your charge an elite squad of defenders to be positioned just outside our city’s gates.

I could not refuse the King. There have been a few skirmishes outside the gates as the Minotaurs try to organize an assault, but they are cut down easily by the defenders. “The might of Ak’Anon cannot be defeated by the likes of you!” they cry before the vile beasts fall under their swords. Still, the Minotaur captain prods on his troops, “Alright you lazy cows, get your hooves moving and attack!” 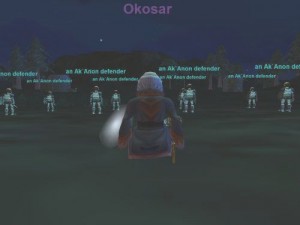 So for the time being, I am sending this via Bard to you from the battlefront. I know I must begin scouting about more when I’m convinced the Minotaurs are at bay. The best way to defeat this threat to our city is to gather as much intelligence as possible so we won’t have to simply respond to their moves. If I can only unravel this plot, I know we can take the initiative and put a quick end to this shadow that is spreading over our lands.

After camping in the Steamfont Mountains, I settled in for a night’s sleep. At about 3:00 in the morning, I was awakened by an ominous rumble from the mountains to the northeast. I broke camp, activated my roboboar, and rushed back to the mine area where I reckoned the sound had come from.

What I found was chaos! Startled and unnerved, Minotaur workers were scattering across the valley in panic. What had happened? Their panic made them no more talkative to me, that is for certain. Even my keen skill of mystical collaboration could not bring them to trust me. Their fear of crossing Meldrath must be absolute

I decided to go back into the caves where I found my old friend, the Brownie I had reported about previously. Still seemingly guarding the mysterious door, he looked off into space, as if in deep thought. “Can you remember anything about the Minotaurs, my friend?” I asked.

“When they got really mad at us they would lock us up in a dark place, like one of their empty tool kits. Sometimes the Minotaurs would come along and play kick the toolbox for a few hours. Those sadistic monsters never get tired of it. Never! And don’t think that just because you won’t fit into a tool box that you’re safe. You’re not. You’ll fit just fine into an oil drum. They like kicking those, too.” END_OF_DOCUMENT_TOKEN_TO_BE_REPLACED